14 year old Frank Cottons 28lb fish caught at Sprouston during this week has to be applauded – being the largest springer recorded on the river for a considerable number of years.  The fish was a fraction short of 45″ long and well proportioned in the girth, was netted by Frank’s father who weighed it at 28 lb 5 oz’s on a set of digital scales. Frank had a titanic battle with the fish as it made many downstream runs – it didn’t show on the surface for around 40 minutes – before it was netted some 55 minutes after it was hooked. Although Frank is only a young chap, he is fast becoming a seasoned salmon fisher with a fair number of fish to his name – mainly caught on the fly – and on this occasion the fish took his size 8 Red Ally’s Shrimp.  After pictures were taken, in line with the rivers C&R rules, 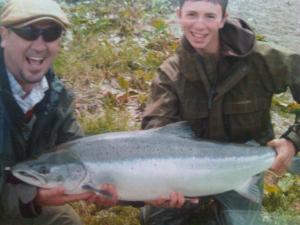