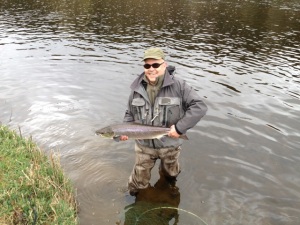 Thank you to Richard Paget for the following:- Just though I’d send you a picture of my father in law with one of Monday’s catch.
Many thanks, Richard

Paul Holland with an 8lbs spring fish (sealice and all) on Lower Mertoun Monday 9th April 2012. The second of two fish caught and released.