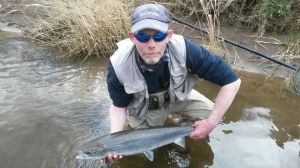 Easter week bought some great weather for those on holiday and rarely have we had such a week will almost wall to wall sunshine.

The beaches were busy with families enjoying a well deserved break, but this did not bode well for the hard working salmon anglers who frequent the river at this time.
The river produced just over 60 fish for the week with catches from the tidal beats right upto Boleside.

Doug Ewart reports, on the Lower Tweed beats
We started the week with optimism here on the “Bottom Tweed” beats as the river on Monday was down to 1ft 7ins on the Norham gauge and falling. It continued to fall throughout the week in the warm, dry weather and ended up at 1ft 1ins which is better for the low water beats which predominate at this end of the river. Things didn’t quite work out however, as only Horncliffe on Tuesday and Ladykirk on Saturday managed to land one springer each. I was out fishing Ladykirk myself on Tuesday and chatted with Matthi Viethen (Head Ghillie) before starting. He informed me that the water temperature was up to 51 degrees and reassured me that the flies I had selected (Wullie Gunn and Black and Yellow tubes) were worth trying. He gave sound advice on line selection (slow sink tip) and pointed out precisely where fish had already been taken this year and with that knowledge, I was off. Like many others, I didn’t catch anything or see a fish but that doesn’t mean there weren’t any there. On Friday I ventured upstream to South Wark where I fished with Richard Farr (ghillie). He again put me right on the best set up for this particular beat at this height of water i.e. intermediate line with the same fly patterns but this time on dressed trebles. We fished in bright sunshine with a light breeze from a direction which actually helped casting; a real bonus for me. Again we had no success but I thoroughly enjoyed being out on the river in such beautiful surroundings and we saw a number of magnificent silver springers jumping or head and tailing on their way upstream through the Willows Pool. My experience so far this season has just reinforced my belief that we are lucky not only to be able to fish this fantastic river, but to have the expertise and advice from real experts who are always anxious to maximise the angler’s chances of success… Thanks Matthi and Richard!

The fish catches for the week with the water levels dropping were congregated mainly around the Kelso area. Sprouston, Junction and beats just above seeing the majority of the action.

Alex Scott has two cracking fish from two different beats on his trip. The first off Boleside a 7 lb Hen Salmon in the Garden Back Pool on the 6th April followed by 15lbs Springer caught on the 7th April at Upper Middle Merton Upper Webbs Pool on a Monkey Conehead. Well done that man!!

Dan Elwood and co fishing Sprouston at the tail end of the week had four fish between them. Two 10lbr’s on Friday, and also lost fish as well. Conditions on Saturday were not good and the wind really got up!!. The most successful fishing time was fishing into the late afternoon/early evening once the sun has come off the water.

Mick at Middle Pavillion took a fish during the week and mentioned that the fish on his beat were more active first thing in the morning prior to the sun getting onto his pools and as a result had morning success. Robert Cranfield was one of his anglers who tempted fish to his fly and great to see the beat kicking things off.

All in all a difficult week with the very bright sunshine, however fish were there for the taking, but a lot of effort had to be endured for the salmon to give themselves up.

Andrew Lee held an open day event on the Bluestone Beat of the Whiteadder and the day was summed up as follows by FishPal’s Anne Woodcock who was helping support the event.
Good to be out chasing salmon said the guests who came along to Bluestone beats opening day on Saturday. The guests had the chance to fish this intimate stretch of 2 miles of prime salmon fishing on the Tweed tributary Whiteadder for free. Fish were seen by the rods, but with a bitter downstream wind casting for them at times was tricky. The welcome sight of hot coffee and bacon/sausage rolls at the hut at lunchtime and friendly fishing & Grand National banter refreshed everyone for the afternoon session. Two rods had their line pulled but sadly nothing stuck.

Sunday I visited Coldingham Loch and enjoyed a days trout fishing from a boat on this super loch. The highlight of her day was seeing Ginger, Tweedhill’s Boatman Brian Palmer catching 17 trout and meeting up with other Tweed Boatman who all agreed it’s one of the best trout fisheries in the borders.

As Doug mentioned in his report, make sure you have plenty of fishing line options and flies with you, as each beat fishes differently on differing heights and temperatures of water. This will certainly aid you in getting a better chance of connecting with a prized Tweed spring salmon.